Cloister of the Monastery of St Francis of Assisi 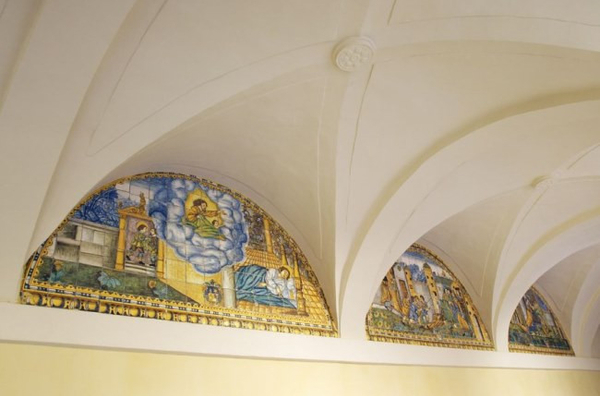 Construction of the Monastery of St Francis of Assisi, for minor friars and recollects, began in 1609 and was completed in 1612. Baroque in style, with Gothic and Renaissance traces, it underwent several transformations.

The remaining elements of the monastery, as well as the church, include the cloister and a number of the surrounding sections, with two storeys and a square layout. Of particular note are the 26 polychromatic ceramic panels produced between 1671 in 1673. The work is attributed to the workshop of the master  potter Llorenç Passoles of Barcelona.It represents one of the most important examples of Catalan ceramics from the 17th century, along with those to be found at the Hospital of the Holy Cross in Barcelona and the Chapel of the Rosary in Valls.

The former Monastery of St Francis now forms part of a large social, health care and education complex run by the Hospital Foundation of St Lazarus.The monastery cloister has since October 2003 been a part of the Terrassa Museum, which administers visits.